This wise guy was chilling it out down amongst the trees at the front of our property and took no notice of Mr FD and I as we took a photo of him. I suspect he even puffed up his pose for us a little more! 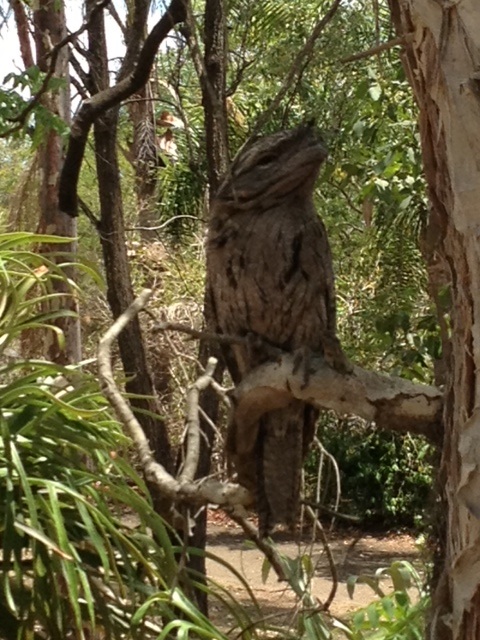 We lunched in the city at a restaurant and I had an odd little chardonnay with my wurst salad. Wurst salad is the modern equivalent  of the ploughman’s lunch – cheese, cold meats, pickle and radish. It was delicious though perhaps a little less salad dressing would have made it perfect. I just kept hoping the it was an olive oil dressing and therefore good for my arteries!

In the afternoon, we visited with BIL. No hospital picnics this time.

He is conscious, and he knew us, but his voice is almost inaudible and he starts a sentence and both volume and subject just trail away. Despite his illness and broken hip he has developed a Houdini act of crawling over the side of the bed rails between the rails and the end of the bed and has taken a couple of tumbles, including the one I mentioned last week. So, they have him in a bed that apparently costs about $40,000AUS that has an alarm that will sound at the nurses’ station if he sits up (his room is across from the nurses’ station) giving them time to run to stop him. It is quite the technical bed, with a mattress that puffs up in areas to relive pressure areas, and extends at the foot end as he slips down the bed (he is only 5ft 6 in so there is some room to go!) The calcium is leaking from his bones and this is part of the reason for the confusion. Eventually he will get drowsy and fall into a coma. He is also on morphine which will have its own impact. His kidneys are still working but his bowels and bladder weren’t doing their bit today.

It is so odd to ponder the gap that is about to open in our family. It is different when it is an aged parent, but when it is a family member of the “younger” peer generation it is almost surreal. We are walking in the land between life and death. We all have to face our cycle of life at some time, can anything ever prepare us for it though?

12 thoughts on “in the land between”