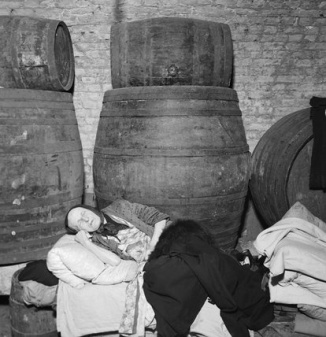 I have just arrived at the realisation that I am perhaps the only person in the world who  is totally glamorous sitting in bed wearing flannelette pyjamas topped by a head of extreme bed hair.

I read book 2 and 3 in Veronica Roth’s Divergent series over the weekend. Since becoming a Teacher Librarian I have developed quite a pleasure in reading YA fiction. YA fiction doesn’t have all the gratuitous language, violence and sex that adds nothing to the story in adult fiction. I love anything John Green writes, and enjoyed The Hunger Games series. Twilight had a hook, but was so poorly written that the editors should have been shot.

I diverge from Divergent. Miss Roth has a great hook, an interesting story line, but almost lost me with the numerous fight scenes in the first book. I suspect it was written with more than an eye on the making of a movie. Book 2 was more enjoyable in many ways, and the fight scenes had more action and dialogue between. She lost me on Book 3 as she changed the style and alternated chapters between the  two central characters. AND HERE IS A STORY SPOILER IF YOU HAVEN”T READ IT YET – how can a narrator be a dead person? Not Death as in the Book Thief, but a person who dies to tie up the story line and keep narrating until they draw their last breath. But don’t cry, the person’s best friend steps in to comfort the remaining partner and hints of a future life together are more than blatant to stop our tears. WEAK WEAK WEAK.  That ranted, thank heavens for such writers who do get our students reading and discussing stories.

I had to reflect on the way the physical act of reading has changed so much since my childhood. The first book in the Divergent series I listened to as an audio book as I drove to school each day. The second book I downloaded as a ebook to my iPad and the third book I read as a paperback borrowed from the school library (the second book was out to students hence my need to download). Books for all places in all manner of ways – reading is so accessible these days. What a gift.

I am off to brew tea, before perhaps a browse of my unread book piles and then a little nap. I intend making seafood chowder for dinner so shall have to rise at some stage, but I am sure I am not the first person to cook in their pjs. Combing of the hair may, or may not be a priority.

I have had a glass or two of wine and so am feeling the milk of human kindness at the moment. I do hope it wears off soon.

Lovely day with Daughter1 and Petite Fille visiting. A rather windy winter’s day and we lit the fire, so the house was so warm and cosy. Petite Fille showed off her growing vocabulary of “hat”, “car”, “Mummy” and sang ei, ei o, for me.

Tomorrow, I have absolutely nothing to do, and so have granted myself permission to stay in bed, or at least stay in my pyjamas all day, should I so wish.

Holidays, got to love them!

Lunched with my dearest friend, Sandpit Girl yesterday (so named for we met in the sandpit at kindergarten – and yes that was a very long time ago). Usually we lunch with one or two high school friends, but this day it was just we two. It was lovely, sitting in the restaurant courtyard in the warm winter sun. We both settled on large bowls of potato and capsicum soup – not sweet potato but white potatoes. The soup was served in large wide bowls and the potato soup was on one side of the bowl and the capsicum on the other, and sprinkled with herbs and paprika. I should have taken a photo to share but I was having too much fun to think of you…but the dish kinda sorta looked like this, only more elegant.

A glass of white, great company and two hours had passed before we called for coffee. Perfection.

A mutual friend has been having issues with her 29 year old recently married daughter. They decided to have family counselling, along with friend’s husband. Daughter arrived with a long list of grievances about how her parents had been the worst parents in the world. Now no one claims to be a perfect parent, but I have known friend since the age of 13, and I know she fought hard to have her one and only child, loved her passionately, gave her everything they could, which was pretty much everything and still do, and honestly they did their best, so all are surprised by daughter’s insistence on her parents faults.

After daughter had left the session, friend’s husband tried to soothe his wife by saying “Don’t worry dear, she will get over it” to which the counsellor replied, “I used to think that too, but with that narcissistic generation I fear not…”

Have we created a monster generation?

Do you ever feel ashamed of your own hypocrisy?

This week we farewelled The Big Boss, who is following his own ambitions to greener pastures. After his final term with us there are few who will really miss him, and more than a few who may have wanted to threw stones instead of word bouquets today, but we all maintained our pretence and pretended that we were utterly devastated that he was no longer our GOD.

Yep, I was a big fat hypocrite. My one moment of glory was writing my farewell on his card. I wrote “goodbye” and no more. We heard all week of his humility, his simplicity and his fairness, when in truth he created a “boys club”, treated colleagues with great harshness and a cold heart, and was arrogant and ambitious to the point that he would no doubt have sacrificed all for his own ends. This week we witnessed blatant discrimination against someone due to their age.  And yet he had “strong religious principles”, oh yeah.

Yes, he was a hypocrite, but then so am I for staying quiet, and while I might tell myself that my lack of action was a necessary survival tactic, and hey he is gone now anyway, I still feel empty inside. Hollow. Shallow.

The wine flowed at lunch and many of us toasted his leaving. I tried to dull the pain of hypocrisy with my glass.

Every school day I rise at 5am and I am on the road by 6.30, as I try to have the library open by 7.30. I don’t actually have to open until 8am, but the number of students dropped off by parents at 7am onwards concerns me, so I try to provide a safe place for them to wait for friends and teachers to arrive.

My reward is the freshness of a new day. This week I have been gifted by a sunrise in a pink sky, that was just breathtaking. This morning, the temperature dropped to minus 1 (my car temperature gauge, though I suspect it had been minus 3 earlier) and I drove through the Village and out through fields of frost covered fields, and mists rising from all the creeks that criss-cross the Village and the adjoining countryside. It was mystical and mythical, and if Arthur had walked from the mist carrying his sword it would have seemed oh so right.

I cleared all the notices off our new blackboard and wrote “Gone fishin’ ” before closing the library for the next two weeks.

It doesn’t get much better than this…

How you must be suffering. I know I have been quiet of late, but at the busy end of the school term, and Mr FD has had complications after his wisdom teeth removal. One more day of students and then Friday is a planning day and farewell to Principal who is moving to greener pastures – then two weeks of holiday. Starting with a Saturday lunch with a girlfriend. Bring on the dolce far niente! So fret not, I shall be back in full glory in a day or so.

In this high tech world of creativity and innovation where we all worry and bother about the use of technology and try to be gleaming examples of it in the workplace, a lesson was driven home to me this week. sometimes new technology is not what is needed, and that in fact it should all be driven by task and need. 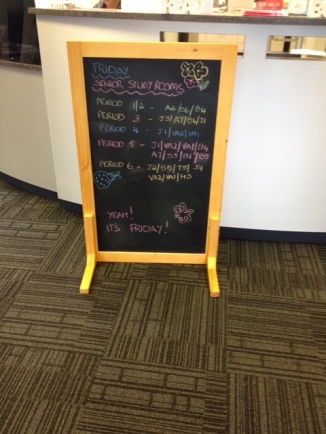 Yes, a blackboard. Not one teacher walked by without commenting on the “great idea” and the benefits of something so simple. I had purchased the blackboard to write motivational quotes and share information. In this instance it was to inform the seniors where their study rooms were during exam period. We have a big rolling electronic notice board screen above but that takes too much time and effort, with the blackboard they can view from outside the library doors instantly and be on their way. S-I-M-P-L-E.

One of those weeks that it took me until lunch time on Thursday to realise that I had forgotten to wear a bra that day.

Winter, lots of layers. I think I got away with it… 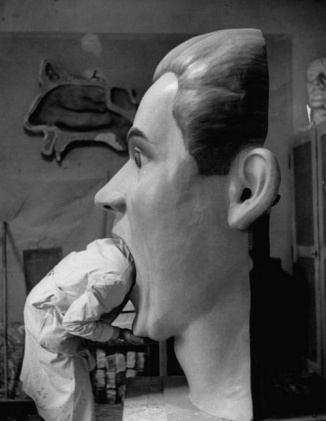 I didn’t have the heart to inform him that he actually lost his boyish good looks (?) sometime on a Saturday in June 1967.

I have survived Mr FD’s wisdom teeth removal! His fate is still undecided.

The procedure seems to have gone well, though the anaesthetist informed Mr FD post surgery that they had trouble placing some tube down his throat, and that he would be writing a letter for Mr FD to hand to any future anaesthetist. All very odd as this is not the first surgery Mr FD has endured, but the first such comment. Mr FD does have a scrap and a stitch inside his cheek and we will be asking questions on his follow up visit, but that mystery aside he is progressing well. Miserably uncomfortable, but irritating enough.

The sight of my husband of 37 years drinking his tea from our granddaughter’s sippy cup due to swollen lips the first night was a little worrying I must say. It was too vivid a reminder of what may lay ahead – I have already acknowledged that he will be a burden and pain in the royal derrière when he ages a little more, I didn’t need the message driven into my brain with a pile driver!

The other lingering image is of Mr FD lying back in his favourite chair with ice packs swaddling his face, but as he had pulled off the ice pack ribbons to tie them around his head, he was using his CPAP mask and straps to hold them into position. Necessity and invention I guess! 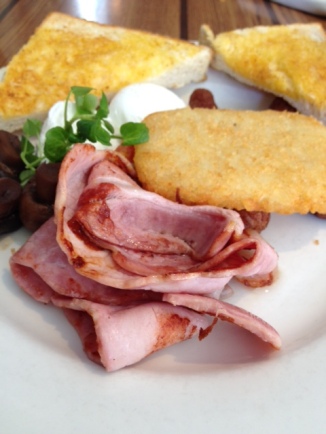